St. John’s Antigua, October 11th, 2022 – The Antigua & Barbuda Social Security Board’s (ABSSB), Director, David Matthias, was elected as the First Vice President of the Inter-American Conference on Social Security (CISS) for 2023 at its Thirtieth Ordinary Session of the General Assembly. This is the second time in CISS’s history that a Caribbean representative achieved a Vice President’s position.

The Director was also elected to a second consecutive term on the Organization and Administrative Systems (CAOSA).

Both appointments are significant achievements for both the Director and the ABSSB. As the ABSSB’s representative, he will be afforded the opportunity to serve as an advocate for the advancement and revamping of social security systems regionally and internationally.

The ABSSB is a long-standing member of CISS, which was founded in 1942 and has its headquarters in Mexico City.  It is a specialized technical international organization used to promote the development of social protection and welfare within the Americas. 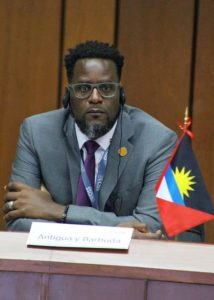